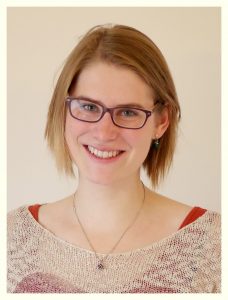 2015                      Bachelor of Science, Department of Biotechnology and Enzyme Catalysis, Greifswald
Project: Enzyme cascade to produce chiral polyesters and investigation on the stability of the cyclohexanone monooxygenase

Since 2017          University assistant and PhD-student, University of Technology Graz, Department of Biocatalysis and Protein Engineering, Austria

Hanna grew up in a small city in the north of Germany. Her strong interest in enzymatic reaction developed early in school while learning the citric acid cycle. After this, she decided to study Biochemistry in Greifswald and specialized in Biotechnology throughout her study. For her PhD she now explores cyanobacteria as candidates for environmentally friendly biocatalysts. She is fascinated by the complexity of enzymes and the creativity of nature to solve problems.

In her free time, Hanna like to go swimming or to play the piano. And not to forget, she is always looking for an opportunity to bake a cake.