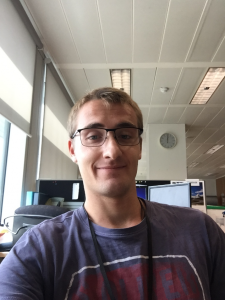 This research work has shown a first step towards the use of non-heme iron-dependent halogenases as biocatalysts that chlorinate small freestanding molecules (Research group: Dr. S. Höbenreich, Chemical Biology).

That’s probably why he ended up in the biocatalytic synthesis group of the University of Graz.

Besides work, Luca is a very sport active guy, always searching for new challenges. His favorite activities are volleyball and swimming.

Also this year his volleyball team competes for the Styrian championship.

Actually, Luca is always in a good mood and has fun with his friends.